Beautiful, Beautiful Hawai’i. Once I was on the island, it seemed ridiculous to me that I ever considered only running the contiguous states. I am glad that I expanded my vision and the universe provided affordable tickets to the lush, tropical island of Maui. After a stressful week of reconfiguring my trip in California and running Big Sur unofficially and unprotected, this was just the rest and relaxation the doctor ordered. Like many of the places I have visited this year, it was unseasonably warm, but that was perfect for days spent at the beach, swimming in the ocean, and trying to correct my growing farmer’s tan from my racing shirts.

I was pretty concerned about the heat in Hawaii. For the most part, I have been running in perfect marathon temperatures – 45 to 60 degrees. Most of the week I was here, we were between 75 to 90 degrees. This is also usually a time when the trade winds help cool things down on the islands but they were nowhere to be found. I figured this race would be a good gauge for my summer marathon routes where I will be running during times most states won’t have a single Marathon going on because it’s so hot. With this in mind I decided to start my run at 4:30 in the morning.

Course Review
Starting the course so early means you are running in darkness. Make sure you bring a reflective vest or lighted gear so you are more visible until the sun comes up. However, when the sun comes up, you’ll be treated to a heavenly sunrise with a fruit salad of early morning colors from papaya pink to golden pineapple. You more than likely won’t need a headlamp because the road and the sidewalks in the first 7 miles were in great condition. As I started the run, I was a little disappointed in the shops and gated communities that block the view, but you start glimpsing the merengue wave peaks of the ocean around mile 1.5 and you have the tranquil sounds of the water lapping the beach for another 2 miles. From mile 3 to 6, you get the roadside attractions of any beach town intermittently blocking your water access, but on the plus side, this is mainly a very flat first half. Reaching mile six, you start to get less touristy beaches and also pass by some nature preserves while starting to have Puu Kukui loom above you with its lush green hill and long line of giant wind mills turning in the breeze. Mile 10 you start the beginning of the hilly second half with a decent 150 foot climb but the you have an equal down hill to give you some momentum heading towards the half mark just past Maalaea. There is really only one marginally higher hill but lots of bumps and bulges to test your tiring legs. Although you start rolling up and down on the hills and tight curves, you really have a majestic view of the ocean around every bend. I wasn’t able to catch it, but there were some mighty big splashes as I was running along and I swear I saw a whale’s tale just breaking the surface. All the way to Lahaina, you are treated to classic Hawaiian beach views where you expect locals to break out in a traditional Luau at any moment. The finish is in old port Lahaina near the park with the ancient banyan trees and the old courthouse. I grabbed a Hawaiian Shaved Ice (don’t call them snow cones!!) to celebrate another beautiful run along a beautiful course.

Lessons Learned
Mirror Your Training To The Race
This is a fairly well-known adage. If you know that you’re going to be running hills, you should be training on hills. If you are going to be running in a warmer clime, you should wear extra layers or run in a space where you can keep the heat an appropriate level. What I didn’t take into account for my training this week was the time I would be starting my race. The earliest I have run any race since the beginning of the year is 6:30 a.m., so my body was not properly prepared to start running at 4:30 a.m. For the first 2 hours it felt like I was running under water, I would look at my watch and see paces that are more common in the later part of my second half of the marathon. Even when I thought I was speeding up, I wasn’t anywhere near my fastest time. Certainly traveling across an additional three time zones may have had something to do with throwing off my body rhythm but I see a summer filled with early morning runs to condition my body for early morning marathons.

Bring a Spare Bandana
Anybody who runs with me knows that I sweat gallons and gallons during a race. As it gets warmer, that sweat dries out sooner and I am covered in a thick layer of salty silt. I brought a spare bandana and poured some water on it to sponge my face and keep my eyes from burning when my sweat would carry large chunks of salt into my eyes. I feel that a bandana is an essential tool for any runner and this was just another reason to carry it.

Physical Review
This was another disappointing week for gauging my running strength. I really feel stronger and that my form is improving, but that is not showing in my pace or timing. Although I started off at a much slower pace then I normally run my first half, I don’t feel that it reduced the stresses on my body or allowed me to reduce my overall time by being more consistent in the second half. I may have done a negative split with my second half taking less time than my first, despite hills and headwind, but it certainly didn’t make it any easier. I felt out of joint in my right hip and right knee, so favoring that side led to my left foot being a little painful after the race. Aside from the early morning lethargy, I did have some discomfort on the plane when changing altitudes in my ankles and my knees. Running along the beach and back to the house on Tuesday felt good though, so I feel my body is still trying to heal me through the stress of each of these successive marathons. It will be tough to leave behind the lush beauty of Maui, but I am stopping by one of my dream locations to run Lake Tahoe, as I make my way to Boise, Idaho for next week’s marathon. Thank you for joining me on this journey, and as always, I look forward to your comments and feedback. 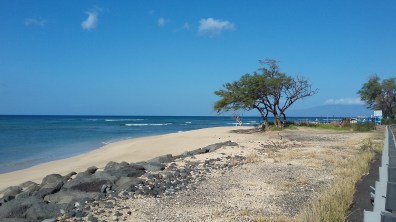 Make it quick...I'm on the run! Cancel reply

This site uses Akismet to reduce spam. Learn how your comment data is processed.